In the December 2007 issue of Popular Woodworking, Senior Editor Glen Huey builds a 21st-century version of a classic Shaker Workbench. It’s time for our annual picks of the best new tools of the year, and we present our list of 15 favorites. Marc Adams continues his new series about working smarter and safer with Woodworking Essentials: Practical Safety Devices.
Online Extras from the December 2007 issue include a drawing showing the location of the workbench dog holes, full-size drawings of the Gustav Stickley Poppy Table for $3.00, download instructions from Shaker Workshops for weaving the Mission Chair seat, and more. Christopher Schwarz has helped many of us solve some pretty frustrating problems over the years.
Our cover project is a handsome and functional lingerie chest by our new Senior Editor Glen Huey.
James Ipekjian has built a career on reproducing furniture designed by Charles and Henry Greene. By Christopher Schwarz Pages: 60-65 From the December 2006 issue #159 Buy this issue now I’ve been attending tool shows to see new woodworking machinery and hand tools for 10 years now, but the 2006 vintage will be remembered as a very good one for years to come.
The cover project of the October 2010 Popular Woodworking issue is an Arts & Crafts sideboard by Robert W.
Michael Dunbar reveals how to understand and use a bowsaw – a traditional tool that is woefully misunderstood by modern woodworkers.
In his second installment, Toshio Odate and his assistant add an innovative drawer design to Magobei’s dining table.
A shop experiment answers the question of where glue goes, and leads its author to adopt a new gluing technique. Online Extras for the October 2010 issue include the free SketchUp model for the Factory Cart Coffee Table, a free 3-D model of the buffet cabinet project in SketchUp format, a video of Michael Dunbar using a large and a small bowsaw, video of a visit to the David R.
I made the decision to murder with a tinge of remorse because I have heard more than a billion times during the last few years that we need trees to help stem global warming. On my first day on the job as an apprentice cabinetmaker, my task was to glue together radiator panels for an office building. By Clarence Blanchard Pages: 72-73 From the December 2006 issue #159 Buy this issue now Few tools spark the affection of so many as the Stanley No.
By Paul Sellers Pages: 66-71 From the December 2006 issue #159 Buy this issue now Many aids to hand-tool woodworking were actually fairly ingenious, very efficient and simple to use because they acted as positive guides to the tools.
By Geoffrey Ames Pages: 57-59 From the December 2006 issue #159 Buy this issue now The housed dovetail joint is mechanically sound, historically correct for 18th-century casework and a hallmark of fine craftsmanship. Lang that combines classic elements from Gustav Stickley, Harvey Ellis and Greene & Greene. In this first of a series of articles, he shows how to get started using this material that was used on the finest furniture of the past. With turbines the air pressure is established by the number of “stages,” usually two, three or four.
Senior Editor Robert Lang builds a magnificent mahogany reproduction of the little-known Gustav Stickley poppy table.
By Adam Cherubini Pages: 34-37 From the  February 2006 issue #153 Buy this issue now One of the first things any beginning woodworker must do is set up a workshop. Lang Pages: 76-78 From the December 2007 issue #166 Buy this issue now When woodworking throws you a curve, how do you respond? Someday, if I ever get some free time, I’ll likely rebuild the base from SYP, using the same knock-down design. A very nice compromise for those of us for whom a monolithic workbench is not practical, or who live outside the yellow pine zone! It’s easy to become locked into one solution because it’s familiar and miss an easy alternative. 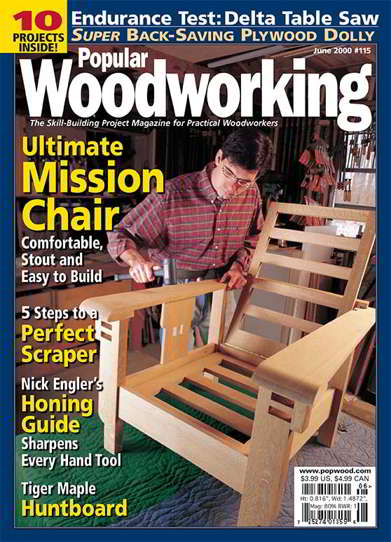