Electrical question Do I need to do anything with conduit before the foundation is layed, or do I just run it up the side after the shed is built? If those are 2x6's laying flat, I don't think they are adequate support for a floor, spaced that far apart and supported only in three places. Then, I'd move the outer ones all the way to the edge of the structure to be under the walls.
A floor made from 2x6" PT will be constructed on top of either the three 2x6s laying flat, or 3 4x4 post. If you place weight on those pavers anywhere other than the center, they will dig into the gravel and tilt.
Don't forget to excavate and remove all the grass and organic material (Black dirt) down to firm earth and lay down landscape fabric to keep the stone from sinking. Am I better off just putting three skids straight onto the gravel, or getting smaller pavers that I can center the skids on without going outside of the building profile and having them rained on? If you have the floor sitting on the ground, gravel or not, rats and other vermin will den under it. Termites won't attack the pressure treated lumber, but they may build mounds or tubes up(whatever the technical term is) to get to the untreated lumber. Rats will nest under anything laying on the ground and also dig nests next to things penetrating the ground like foundation walls. If you go with joists and just 3 or 4 skids and are digging the grass and soil out by hand, then you could skim the grass off and just dig trenches for the gravel where the skids go and save some work and expense. What would you guys say an average cost of materials is for a medium shed say: 4x8 or 6x10? My building site with the blocks in and leveled and part of the existing compost heap moved to my raised garden beds. Front wall is framed and ready to raise.  Gotta get DH to help me lift this thing, it's heavy!! Walls framed and rafters on.  The back wall is 6' and has a 6'x18" framed opening for a cleanout door.
The roost will be on the north (6') wall, but no higher than 4', so hoping any winter winds will just go over their heads and not be an issue. The front window is in (Craigslist, $5!) and the front siding is on.  Starting to really see the final shape.

Still have to run hardware cloth around the bottom of the shed, I'm going to enclose the entire bottom and run a skirt out so nothing can get under there (predator or chicken!).  I can just imagine trying to coax a chicken out from under there.
The girls are moved in and enjoying the sunshine through their front window.  Put up a temporarly barrier until I can get the real wall built, but going to have to get that done as my EE is already flying up to sit on the long clamp arm! Finished the interior wall before anyone "flew the copp", at least that I'm aware of and started painting the coop exterior. I'm going to add white trim boards on the corners and around the windows to finish the look once I'm done painting the exterior blue. You are currently viewing our boards as a guest which gives you limited access to view most discussions and access our other features. Also, I am sure I will have a few questions throughout the build as I am working alone and not all that skilled at framing. I know I want to keep the pavers in from the edge as shown in the below pic, but do I make the gravel larger for drainage?
Namely; max roof height, my plans I am working to, and the amount of those shingles I can't find anymore. This would save an additional 2" but require treated joists for the second method using joist hangers.
You need a starter course, which can be either real starter or another shingle of a similar color with the tabs cut off.
I'll have to move more of the heap back once I start on the run, but one thing at a time and I want to get this coop built.  I'm trying to use up a bunch of materials I have lying around the property so a decking block got in the mix.  But still one block short, back to Lowe's!
Since it's OSB, I primed all the edges with Kilz, including the uncut edges, just to be safe.  I know there's strong plywood vs OSB opinions, but this is what I had on hand!
The shed paint is a mix of a dark blue Lowe's oops and some leftover exterior gray from our house. Additional top rails will be used to support a wire top, the main predators we have around here are of the flying variety, so I want to make sure nothing can swoop in and take one of my birds. But I have to get the painting and trim done in the run area before I can enclose the top, so that section is the priority. By joining our free community you will have access to post topics, communicate privately with other members (PM), respond to polls, upload content and access many other special features. I have it in my head that this will prevent shifting and keep underneath the shed from being a critter farm. 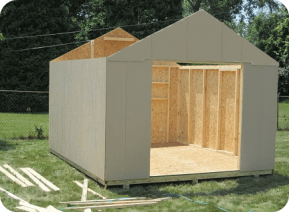 Hoping I can use another shingle since I can't get these anymore and couldn't afford them if I could. I already had to cut out a dormer because I was running it too close on the shingles I needed. Make sure you choose very straight ones and make your compacted gravel very level as this will set you floor level unless you shim your joists. One mistake I made, I laid the larger sheets parallel to the floor joists instead of perpendicular.  But the floor joists are 2x8s and the shed will house chickens, not heavy equipment, so I think the floor will be strong enought!! The rafters are 2x8 and have birds mouths cut into them, plus I used hurricane ties.  Probably overkill, but again, the ties were in a box, so now they're on the shed.  East wall has framing for two hinged windows, Craigslist - $5 for both! I've thought about roofing part of the run, but since we do get really strong winds, I'm a little concerned about creating a wind sail that will end up damaging the run. I have all summer to finish the rest of the painting.  Gotta get this run functional so the girls can come outside to play! Contrary to Oregon weather stereotypes, central Oregon gets 300+ days of sunshine a year, so I'll probably wait and see how they do this winter before I make a decision about roofing the run. If you have any problems with the registration process or your account login, please contact contact us.
In fact, to get the least height, if you level your pad very well and choose straight skids, you could use enough skids to make them the floor joists and nail the plywood directly to them. The floor joists need to be of a minimal dimension to keep the floor height from grade to a minimum. Account for not just the size of the shed, but the overhangs on eave and rake and also how much the drip edge adds to the eaves and rakes. These need support more often than a deeper section so if they are spanning the 10' dimension I would support them at 3 places at least.
Skids, if 4x4 need to be supported at least as often as the joists since joists bear on them.
Place the solids around the perimeter so that their outside edges are flush with the outside face of your wall framing.